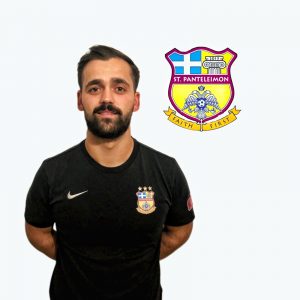 From a very early age, Donald realised that he was different…he was gifted with attributes that would compensate  his lack of height…HIS THICK HANDS! Having started his football career as a striker, he quickly realised that his true potential was in goal. With his extra padded hands, he was unpassable in the school playground, and it was here that his talent began to shine and received praise and acknowledgement from his peers, teachers and local coaches.

Having begun with local football teams in North London, he progressed through the ranks onto semi-professional football with spells at numerous clubs. Despite always being the shortest goalkeeper, he was always the loudest which made him preserve and achieve many accolades throughout the years.

Then, the mighty St Panteleimon turned up where he quickly realised the setup, went beyond just a football club, it was a community club, with strong values at its core. But most importantly, a footballing family guided by George Frangeskou.

The records speak for themselves, but they wouldn’t of been achieved without discipline to maintain the highest level, hard work and an army of spartan brothers, that stand side by side through everything.

The Saints are playing some Pre-Season friendlies in August.

No Spectators will be allowed.

Our advert in the @Parikiaki newspaper today.