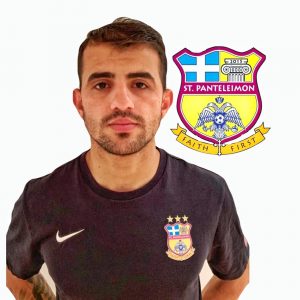 I started my journey in football very early, playing futsal from the ages 7 – 14 in my hometown.

At 14 years of age, I went to PSTC in Londrina, where I played under14s and under15s.

At 16 years of age, I was transferred to Joinville FC, where I had my first professional contract at 17. I played the 4th division of the “Brasileirao”, and on the following year we got promoted to the 3rd division.

I was 23 years old when I arrived in England, and agents took me to Italy to play the 4th division for Unione Triestina. I played one season and returned to the UK, where I played two years for Helvecia Futsal. We became champions two seasons in a row, and played in two UEFA Champions league.

Playing for an amateur team called, AEK London FC, I met George Frangeskou who invited me to play for his team, a group of guys that fights and share the same objectives which is to win! 2 years has gone by, and I am really happy to be part of this family.

National Federation of Cypriots in the UK@UKCypriotFed·
29 Mar

#Today were proud to launch an initiative under the auspices of @CyprusMFA-@Christodulides to support #UK-based #Cypriot students, by providing them with a free food package. If you’re eligible register here: http://www.cypriotfederation.org.uk/studentfood #GettingThroughThisTogether

@StPanteleimonFC Thoroughly enjoyed watching you guys this season. Superb football throughout. Wishing you all the best, and looking forward to next season. Stay safe guys and best wishes 👍

If you're a football person, please join the challenge of posting a football photo. Just one picture, no description. Copy the text in your status, share a picture and look at some great memories.