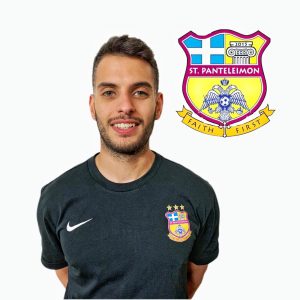 Mishari Al Ashban born and raised in Saudi Arabia with a Greek mother and Saudi Arabian dad, started his football with top flight club Al Qadisiya FC in the 90’s going through the ranks. Later on he managed to play in Greece with Apok Velouxi 4 division then getting picked up by olympiakos in 2008 but only to catch the eye of charlton veteran and scout Masiello Luciano who brought him to England in 2009. But instead signed with Southend United FC for a year. After that he had spells with non-league clubs like Grays athletic FC, Great wakering rovers FC, Billericay FC, Bandbery FC, Tonebridge angels FC, Bromley FC, Broxbourne FC. And finally he met George Francescou and the saints family and just fell in love on how they do things not only on the football pitch but his philosophy and how to do things in life the right way.

@StPanteleimonFC Big victory today with all odds against us happy have played my part 💙💛 WE MOVEEEE !!!!!